A coordinated effort between Central Michigan University, Sturgeon for Tomorrow and the Michigan Department of Natural Resources to understand the ecology and population dynamics of lake sturgeon in Black lake has completed its first field season in 2000. In 1997, the MDNR conducted a population estimate of adult lake sturgeon and found a 66% decline in numbers over a 25 year period. Research conducted this past field season was aimed at attempting to find data that will aid the M-DNR in managing this valuable resource. The primary objectives for this research were to 1) assess the annual production of larvae in the Upper Black River, 2) to determine the river residency and habitat utilized by migrating larvae and juvenile lake sturgeon, and 3) to establish new methods of sampling for long-term sampling efforts of lake sturgeon in the Black Lake system. 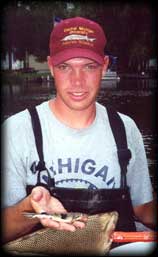 Larval drift sampling began on May 10 and lasted until June 6 and was conducted at 9:00 p.m. until 3: 00 a.m. A total of 780 larvae were collected, measured and studied during this sampling period. River residency and juvenile abundance was studied in June until September 2000. We captured juveniles utilizing gill nets and electroshocking equipment in both the Upper Black River and Black Lake. Sampling efforts with seines, fyke nets and bottom-trawling equipment were also utilized, but with no results. Electroshocking equipment captured 6 age- 0 lake sturgeon in the Upper Black River, while gill nets captured 2 juvenile lake sturgeon and several adults.

Overall, the first field season was a success in terms of locating and characterizing the spawning sites and collection of larvae throughout the river. The capture of juvenile lake sturgeon, which ranged in size from 7 inches to 8 inches in length, was an important step towards future research and management efforts. In 2001, research will follow similar efforts as were conducted in the past field season. New projects that will be implemented for the 2001 season include, increased sampling efforts with gill nets and bottom-trawling equipment throughout Black Lake. More effort will be placed on collecting larvae and determining nursery areas as well as the river residency time for juvenile sturgeon.