At the mouth of the Upper Black River, a temporary weir was set up and monitored from April 22 through May 27, 2001. Mounted directly over the weir were 2 digital cameras. In an adjacent structure were two VCR units taping 24 hours a day. Sturgeon Guarding Program coordinators utilized one set of videos. Kregg Smith, Graduate Student, Department of Biology at Central Michigan University utilized the other collection of video documentation. There were 280 adult lake sturgeon observed on video ascending upstream in the 2001 spawning run, some of which were repeat individuals.

Large nets were used in the river to capture and study 115 adult lake sturgeon. Each of the sturgeon was tagged with a Passive Integrated Transponder (PIT) tag that have a life expectancy of 100 years. The sturgeon were also tagged with a floy tag in their dorsal fin. Data collected on each individual include: date, mean length, fork length, weight, girth, gender, location sampled, and a small fin sample was collected for genetics.

Twelve of the sturgeon studied in the river had been marked in the 1997 population survey by evidence of the pectoral fin configuration or by the presence of a floy tag. Average length of the females was 4-1/2 to 5-1/2 feet in length, and the average length for the males was 4 to 4-1/2 feet. Other data collected supports that on average individual adult sturgeon remain in the river from four to seven days.

Drift net larval sampling was conducted throughout May and into mid June. As part of the Head Start Program, 2,800 larvae were collected and transferred to the Wolf Lake State Fish Hatchery to feed and nurture. 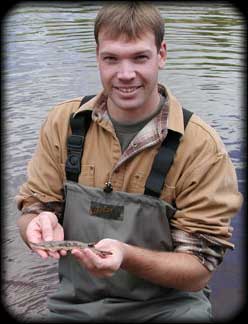 Sampling efforts continued on Black Lake throughout June, July and August. Thirty-one lake sturgeon were collected and sampled using 6 to 10 inch stretch mess gill nets. Four of the sturgeon netted in the lake had floy tags and had been sampled in the 1997 adult population survey. Setlines were used but were not productive. Sturgeon sampled in the lake ranged from 7 pounds and 27 inches to 101 pounds and 60 inches. Pectoral fin ray samples were collected and studied on 5 of the juvenile sturgeon. Ages of the juveniles sampled ranged from 6 to 12 years old.

In September, 913 four to eight inch sturgeon fingerlings were reintroduced to the Upper Black River below the Kleber Dam. Each of the fingerlings are marked with a coded wire tag in their snout.

Twenty five fingerlings will remain at the hatchery over the winter. Telemetry studies will be performed in the Spring of 2002 on each of the 25 fingerlings. They will be equipped with a sonic transmitter to study migratory and distribution patterns. 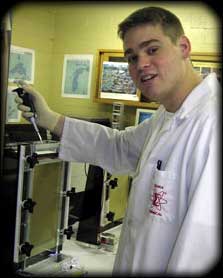 Genetic markers are increasingly used to learn more about the behavior and ecology of many animals including Lake Sturgeon. One area of Lake Sturgeon life history that little is known about is the mating system. Since sturgeon congregate in large groups on spawning grounds, it can be difficult to determine how many individuals are spawning with one another at the same time, which individuals are the most successful (i.e. greater numbers of offspring) and if all of the adults on spawning grounds are reproducing. In an attempt to answer these questions we designed a study that utilizes genetic techniques to describe the mating system and assess the degree of variation in male and female reproductive success of Lake Sturgeon in the Black Lake system.

During Spring of 2001 when adult sturgeon entered the Black River to spawn, small tissue samples (approximately the size of a thumbnail) were taken from the tail fin of nearly all adults. After adults spawned in the river, juveniles were collected as they drifted downstream to Black Lake. The juveniles were then taken to the Michigan Department of Natural Resources' Wolf Lake Fish Hatchery where they were reared for later release as part of a Head Start Program. We obtained small tissue samples from juvenile sturgeon before they were released into Black River this past fall. 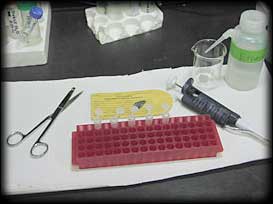 At the Molecular Ecology Laboratory in the Department of Fisheries and Wildlife at Michigan State University we are currently genotyping the samples obtained from the adults and the juveniles. Using molecular genetic markers we will be able to determine the parents of each juvenile sampled. Data obtained from these analyses will be used to examine several aspects of the lake sturgeon mating system. We seek to determine the number of males each female spawns with, the proportion of offspring each adult is contributing to the next generation each year, and the proportion of the total adult population that reproduces each year. Because lake sturgeon do not spawn every year we plan to continue this study in future years to get a more accurate representation of the lake sturgeon mating system. This information will be helpful to agencies such as the Michigan DNR when designing artificial breeding strategies that mimic natural situations and minimize inbreeding.

The Michigan Department of Natural Resources will again be surveying the adult lake sturgeon population in Black Lake during summer 2002. The survey will last several weeks and the exact dates of the survey have not been determined yet. The survey is designed to monitor Lake Sturgeon abundance through time and is one of the vital parts of Lake Sturgeon management in Black Lake. The last time the population was surveyed in 1997 the results demonstrated the need to restrict harvest and implement restoration measures to rebuild the population.

By surveying the population at five-year intervals the DNR will be able to evaluate current harvest regulations and adjust harvest rates when appropriate. The survey will be conducted over the course of several weeks during June-July-August and the DNR will be using large-mesh gillnets to capture lake sturgeon. The gillnets will be marked with floating buoys and boaters and particularly anglers are urged to avoid the immediate area around the nets.

Not too long ago the most sophisticated tool for tracking living organisms was with binoculars. Today we can gain amazing new insights into previously undetectable aspects of animal behavior with telemetry technology.

In May of 2001, larval lake sturgeon were collected when they were approximately one inch in length. The collection process took place downstream of the lake sturgeon spawning site on the Upper Black River.

In the spring of 2002, telemetry studies will be performed on 24 juvenile lake sturgeon. The 8 to 10 inch fingerlings have been cared for at the DNR Wolf Lake State Fish Hatchery. Small transmitters will be affixed to the juveniles and they will be returned to the area of the river from which they were collected. The transmitters give off a signal and a receiver with headphones hears the signal. Researchers will track the juveniles to aid in the discovery of their migratory and distribution patterns.