Drift net larval sampling was conducted on the Upper Black River to quantify out-migrating larval sturgeon. Larval drift were detected 18 days post-spawn. Two distinct pulses of larval sturgeon drift were observed. The two pulses overlapped for several evenings but were easily distinguished by differences in the body size of the individuals in drift (i.e., much smaller individuals in pulse 2). Similar to previous seasons, we observed a discernable peak in the numbers of drifting larvae within a particular sampling evening (11:00p.m.-1:00a.m.).

A total of 16,417 lake sturgeon larvae were collected. 431 larvae from group one and 15,986 from group two. Larval sampling was generally conducted during a 5-hour period, beginning at dusk and ending in the early morning (2:00 a.m. to 3:00 a.m.). All sturgeon larvae were immediately placed in a separate container and transported to the flow-through tanks located at the nearby field station. All larvae were transported from the field station to Wolf Lake Fish Hatchery for rearing.

This exclusive, one-of-a-kind venture is the outcome of the cooperative efforts of Sturgeon For Tomorrow, the Michigan Department of Natural Resources and Michigan State University.

The "Head Start Program" is the first in the world to collect larval lake sturgeon, transfer them to a hatchery for nurturing and reintroduced to area streams. The reintroduction of these young-of-the-year lake sturgeon in an ongoing effort to rehabilitate the lake sturgeon populations of Black, Burt and Mullett Lake.

Thirty fingerlings remain at Wolf LakeHatchery with the intentions of conducting telemetry studies in field season 2004. 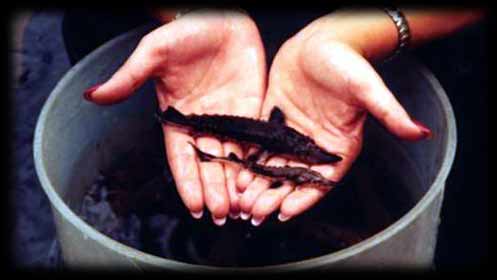 A task group has been organized to determine if there is sufficient local interest and support to construct erosion control and public access projects on the Upper Black River. The projects are needed to control soil erosion into the water, provide public access while protecting sturgeon spawning habitat. The project sites were previously identified in the Black Lake Watershed Stewardship Initiative, Non-point Source Pollution Management Plan (June 2002). The proposed projects are in proximity to some of the last remaining sturgeon spawning habitat in northern Michigan.

Several grant proposals have been submitted with hopes of funding beginning in 2004-2005. SFT has pledged hands on – in kind support for these projects as we recognize the enormous benefits to lake sturgeon rehabilitation and recovery.