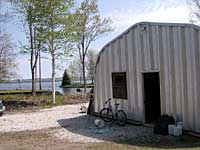 The 2005 field season started off with a bang, that bang resulting from a 40 foot long steel building hitting the ground in early April. For the next month we became more engineers than biologists. It is amazing how such a project came together so quickly. With the help of Sturgeon For Tomorrow and a number of local residents we had the building constructed within 4 days of its arrival. Then came the pumps, tanks, and associated plumbing which would not have come together without the assistance of the Oden fish hatchery who supplied us with numerous man hours and tools. We can not express our gratitude enough to all those involved with getting this facility up and running. 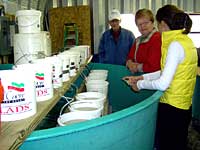 When we finally got back to being biologists we had some great success and have learned a lot over the course of the summer. This year's weather cooperated very well and with the low water levels we had access to handle a very high proportion of this years spawning run. We took eggs from 14 females and to no ones surprise had no problem collecting milt from multiple males. Eggs were brought back to the stream side hatchery fertilized and incubated in heath trays. This resulted in offspring that hatched from 27 different families. We also transported half of the eggs down to the Wolf Lake State hatchery were they were incubated and are currently being raised. We learned a lot about incubating sturgeon eggs this year and have come up with the ultimate formula for a successful hatch. Just the right mix of AAA batteries for your head lamp, mixed with some elbow grease, patience, and 18 hours a day sorting and removing dead eggs or ones with fungus does wonders for a successful hatch. Lucky for us the eggs hatched within a week. 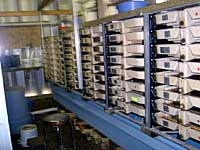 Artificial spawning was one of three collection methods we used this year. We also collected eggs from the water column and substrate that were fertilized naturally and incubated those at the stream side hatchery. The third collection method consisted of collecting larvae dispersing downstream from the spawning sites. Each of these collection methods are separated within our tanks so that we can follow differences in growth and survival. It has been interesting to observe the differences between families. Some grow well in high numbers while others don't. Some families are all the same size while others have big guys, medium guys and some runts. To date the fish in the hatchery range from 2 inches to just over 5 inches. 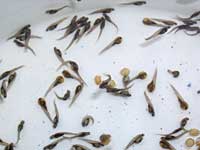 On July 20th we released the first batch of fish just above spawning site B. There were approximately 4000 in total, half from Wolf Lake and half from our stream side hatchery. Each fish was distinctly marked with a florescent tag on their upper back so when re-captured we could identify the collection method it originated from as well as the location where it was reared. Preliminary data shows the stream side fish moving further downstream faster however once the fish started to settle out we had a hard time finding them. The next release will be August 16th. Over the next few years we hope to identify the most appropriate age at which to release juvenile lake sturgeon. We will also be holding a number of fish from both Wolf Lake and Black Lake until late fall when they are big enough to receive acoustic transmitters. We will use these transmitters to look at differences in movements between the fish reared downstate and the fish reared in the natal water. 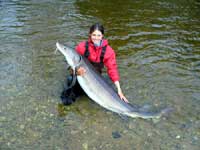 In closing we would like to once again thank all the help we have received this summer. Sturgeon for Tomorrow, the DNR, and the local residents have made for a fantastic and eventful summer.