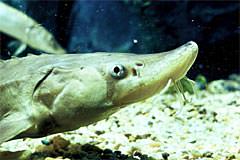 Thanks to the extremely large number of spawning adults in this year's spawning run we were successful in obtaining eggs from 12 females and milt from the majority of males. Like 2005, eggs were incubated at both our streamside hatchery and at Wolf Lake State Hatchery to identify differences in hatching times and survival between these two rearing environments. We produced a total of 21 different family groups. Time to hatch was approximately 1 week at the stream side hatchery and a little longer at Wolf Lake due to cooler water temperatures.

Fungal infection was not a major issue for the first few batches of eggs however eggs fertilized later in the spawning season were subject to higher fungal rates because of rapidly warming waters.

During the incubation period this year, we also had the opportunity to run predation trials at the hatchery using dead eggs that were no longer developing. In one experiment, four 12 foot raceways were divided equally into three four foot sections using grooved wood channeling and stainless steel screening. Each raceway was filled with flowing water taken directly from the Upper Black River. Predators were collected from the natural stream setting (crayfish in this situation), and allowed to prey on lake sturgeon eggs across three substrate sizes. In general, we found that lake sturgeon eggs were extremely vulnerable to predation by crayfish over a period of time (i.e. 30 crayfish were able to consume nearly 600 eggs in 24 hours.) 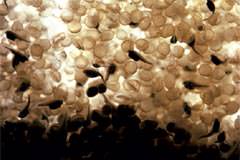 The stream-side hatchery has run smooth. Early this spring we made improvements to our incubation system in an effort to further remove fine particulates from the incoming river water. This was done to reduce fungal infection, sedimentation build up, and overall stress on the eggs.

We installed a large number of small 1 gallon rearing tanks to serve as holding tanks after the fish had hatched from the incubation trays and to use for experimentation purposes. With the addition of the small rearing tanks we were able to examine some interesting questions we had concerning larval lake sturgeon development. We were particularly interested in how larval sturgeon utilize their yolk-sac reserves after they have hatched.

We subjected different family groups of larval lake sturgeon at hatch to 4 different environments. The four environments were an open tank, a tank with cover so the larvae could seek refuge, an open tank with food, and a tank with cover and food. We removed fish every 2 days from each tank and took pictures of them. This provided us with a measurement of how they grew and utilized their yolk-sac reserves over time given differences in refuge and resource availability. 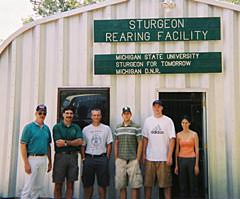 We are also pleased to report that the lake sturgeon were also very successful in reproducing this year as indicated by large number of larval fish that we captured drifting downstream from the spawning sites over a month of sampling (7,434).

As in previous years, we deployed drift nets at the same location on the Upper Black River (Site D3) throughout the entire larval sampling season. Within this location, five drift nets were deployed approximately two meters apart in a straight line along a transect across the stream channel. Majority of the larval fish were captured during several "peak" hours of drifting activity between the hours of 11:00 pm and 1:00 am.