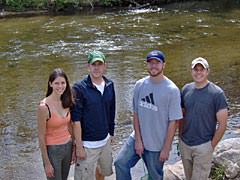 The day following the Sturgeon For Tomorrow Banquet turned out to be a frenzy with several dozen expectant onlookers watching over the 3,600 five month-old sturgeon fingerlings being released into Mullett and Burt lakes. Another 4,200 were released in the Upper Black River on September 18. Five-Thousand were reared in the streamside research facility on the Upper Black River, and 3,600 were raised at Wolf Lake State Fish Hatchery. 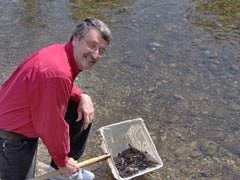 Kelly Smith, the chief of DNR fisheries in Lansing, said he thinks the relationship between the DNR and Sturgeon For Tomorrow is vital to bolstering the dwindling sturgeon population in Michigan.

"This partnership between Sturgeon For Tomorrow and the DNR in protecting and rehabilitating the sturgeon population is important to the state," Smith said at the Annual banquet. "It fits in with the rehabilitation efforts statewide."

He said the partnership, including the sturgeon guards who patrol the rivers during the spring spawning season to prevent poaching, is unique to Michigan.

"There is an effort to study and rehabilitate the population around the state, and it is done in ways we don't see in other states," he said. 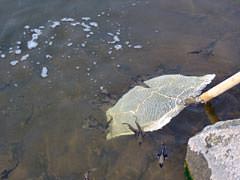 Sturgeon For Tomorrow President Brenda Archambo said, "We are thrilled to see these unique fish returning to their natal stream." "We don't want to raise sturgeon and simply turn them loose without having an effective monitoring program in place to evaluate and steadily improve our techniques," she says, "especially since our goal is to re-establish a self-sustaining population." We captured naturally drifting larvae, collected/ mixed eggs and milt, and used cultured eggs from the stream then nurtured them for five months within the protected environment of a hatchery (here and Wolf Lake). This greatly increased their survival rate without compromising the genetic diversity of the population."

"We are on a quest to quantify natural recruitment, and we will assess the releases overtime in an attempt to better understand the early life history of this majestic creature."