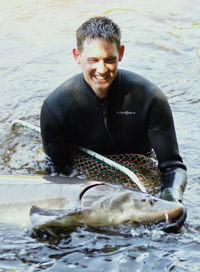 The 2010 Black Lake research season began on April 14th when Michigan State University and Michigan Department of Natural Resources and Environment researchers captured a six foot, 130 pound female lake sturgeon ascending the Upper Black River near the Sturgeon for Tomorrow Site C guarding location. This was an early start compared to previous years, yet the adult sampling period continued into June with the last sighting of a sturgeon in the river being recorded on June 7th.

In addition to hatchery propagation, wild larval lake sturgeon were captured as they drifted downstream, after having utilized their yolk-sac reserves while incubating in the interstitial spaces on the river-bottom. These wild larvae represent the best stock source genetically, so all captured larvae are brought back to the Stream Side Rearing Facility in an effort to enhance survival. This year, larval drift sampling began on May 13th and ran until there were two consecutive unsuccessful capture nights, which this year was on June 30th.

Efforts to collect the wild sturgeon larvae proved to be difficult due to the high variability in water level this spring. During the early spawning period adult lake sturgeon were likely unable to reach preferred spawning habitat due to low flow, which resulted in over 70% of the spawning occurring in the downstream reaches which contain less than suitable spawning habitat.

As a result, egg and larval offspring survival was likely lower and is reflected in our 2010 drift sampling results. Also, several days later in the drift sampling period, high flow prevented access to the drift sample site and larval collection was postponed. Despite obstacles, a total of 2,242 larval lake sturgeon were captured this year with over 700 of those having been captured on one sampling night.

This year marks the second year of operation of the new stream side rearing facility located near Tower-Kleber dam. There are hurdles when dealing with a new operational rearing facility, especially when geared towards rearing a species like lake sturgeon (a fish with a naturally high mortality rate during the early life stages). However, as research continues and new aquaculture techniques are adapted, researchers can improve hatchery survivability of this imperiled species.

We would like to thank everyone that visited and assisted us down by the river (Gary Stranely). We thank those that helped with equipment repair (Gill Archambo) and hatchery tours (Bob Bonner), as well as those that stopped by the facility to see the sturgeon. We thank Brenda Archambo for the great food and for all of the great media coverage we received during the field season. We also thank the Sturgeon for Tomorrow volunteers for their positive feedback (Ann and Mark Feldhauser, Kathy Bezotte). Special thanks to the Theisen, Gruss, Block, Fletcher, and Davis families.

The Michigan DNR and Michigan State University conducted a preliminary large-mesh gillnet survey of Mullett and Burt Lakes during July.

The purpose of the survey was to gain insight into sturgeon distribution within each lake and to provide baseline data that could be used to plan more intensive survey efforts in the next two years.

The Michigan DNRE and Michigan State University conducted a large-mesh gillnet survey of Mullett Lake during July, 2010. The purpose of the survey was to gain insight into sturgeon distribution and abundance within the lake. The total number of unique fish captured was 70.

Most captured fish were relatively small and either carried a coded wire tag, had deformed fins indicative of hatchery origin, or both. Fish were captured throughout Mullett Lake but most were captured in the north end. Locations sampled were from 15-35 feet deep due to gear restrictions. Genetic analysis of tissue samples collected during the survey should confirm the origin (hatchery vs. wild) of the fish captured.

One fish that was recaptured had been captured and tagged during the initial 2009 Mullett Lake gillnet survey. The fish was 33.5 inches when captured in 2009 and was 40.2 in. when recaptured, an increase of 6.7 in. This growth rate is high relative to other lake sturgeon populations and indicates there is abundant food for lake sturgeon in Mullett Lake.