The 2011 Black Lake research season began in early April when Michigan State University (MSU) and Michigan Department of Natural Resources (MDNR) researchers spotted a four foot lake sturgeon ascending the Upper Black River near the Sturgeon for Tomorrow Site B guarding area.  Although individuals were spotted in the river during the early and later periods of April, spawning did not commence until early May.

On May 3rd of 2011, ten individual lake sturgeon were captured between regions above Site B to below Site C.  The first capture was a 5.9 foot female lake sturgeon weighing approximately 115 pounds.  Early spring flooding likely postponed spawning activity nearly one and a half weeks compared to 2010. 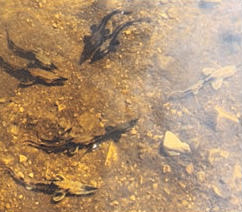 A total of 230 lake sturgeon were captured throughout the spawning season which ran from early May to mid-June.  Gametes were collected from spawning lake sturgeon (10 female, 20 male) and were transported to the Streamside rearing facility for fertilization and rearing.  In total, there have been 783 uniquely marked individual lake sturgeon captured in the Upper Black River since 2001.

Aside from those individuals hatched from eggs, researchers also captured wild larval lake sturgeon as they dispersed downstream.

Previous research has found that these wild larvae represent the best stock source genetically, so these larvae are captured and brought back to the Streamside Rearing Facility in an effort to enhance survival of this unique stock source.

This year, larval sampling began on May 13th and ran until June 22nd.  Throughout the spawning and larval drift period the river water level was consistently higher than in previous years.  This likely enabled spawning adults to reach spawning areas that typically (in the last ten years) were unavailable due to low water level (e.g., near the hydroelectric facility).  As a result, researchers captured nearly 10,000 dispersing larvae during evening larval drift surveys.  These high flow events may have benefitted larval production in the river. However, as larvae dispersed they may have been forced out of nursery areas by the high flow sooner than normal which is reflected in our night visual assessment summary.

We would like to thank all of you for your assistance on the river and your support during the off-season.

The Michigan DNR and Michigan State University conducted a large-mesh gillnet survey of Burt Lake during July, 2011.  The purpose of the survey was to gain insight into sturgeon distribution and abundance within the lake.  Overall, the number of sturgeon captured was low compared to similar survey efforts in Black Lake.  The total number of unique fish captured was 108.  In comparison, a three week survey effort in Black Lake in 2007 captured a total of 194 lake sturgeon.

Since 2003 the DNR and Michigan State University, along with Sturgeon for Tomorrow, Tower Kleber, and others,  have worked cooperatively to rear and stock lake sturgeon into Burt Lake.  With the exception of fish stocked in 2005, lake sturgeon stocked in Burt Lake since 2003 have been tagged with a coded wire tag.  We used a coded wire tag detector during the survey to check captured fish for the presence of a coded wire tag.  Most captured fish were relatively small, and either carried a coded wire tag, had deformed fins indicative of hatchery origin, or both.  A few large adult fish were captured in Burt Lake.  Fish were captured throughout Burt Lake but most were captured in the eastern portion of the lake in the area known as Sturgeon Bay.  We sampled locations throughout the lake but did not sample water less than 4.5 m deep (15 ft) due to gear restrictions. There were no lake sturgeon mortalities during the survey.

The lake sturgeon population in Burt Lake is made up of almost entirely relatively small and immature stocked fish.  Of the 108 unique individuals captured only about 10 fish were large enough to potentially be naturally produced fish.  However, it is possible that these fish were also stocked because Burt Lake was stocked with lake sturgeon in the 1980’s.  Genetic analysis of tissue samples collected during the survey should confirm the origin (hatchery vs. wild) of the fish captured.

We recaptured one fish that had been captured and tagged during the initial 2009 Burt Lake gillnet survey.  The fish was 38.6 in when captured in 2009 and was 42.3 in when recaptured, an increase of 3.7 in.  All of the captured fish appeared healthy and robust which indicates there is abundant food for lake sturgeon in Burt Lake. 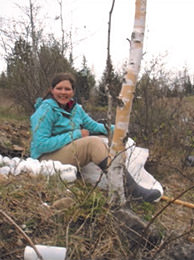 Human disturbances have altered natural environments and disrupted selection regimes across all biological scales. Organisms likely respond to human changes through modifications in the genetic composition of populations and through phenotypic and/or behavioral plasticity. We examined whether plasticity in larval behavior (timing and distance of larval dispersal), phenotype (body size, shape) and physiology (yolk sac utilization) would vary among families when exposed to different environments. Additionally, we were also interested in examining whether developmental plasticity would be affected by the environmental conditions experienced during each earlier developmental stages. The experiments were conducted within the upper Black River where fertilized eggs from several families were allowed to incubate in river sections characterized by different temperature and flow conditions. Upon hatch, individuals were photographed to measure body size and size and time to hatch was compared between families across the sites. Fertilized eggs from multiple families were exposed to one of three flow treatments (high, low, and variable) within our stream-side facility. Upon hatch, individuals were photographed to quantify body size and placed in individual chambers within raceways to measure growth. Results showing variability among families and across developmental stages is of importance to predict potential long-term consequences of human-modified environments including climate change to juvenile survival and population levels of natural recruitment. 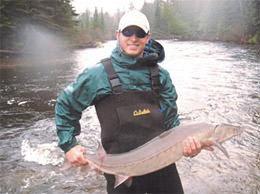 Bill Oeming is a recent (May 2011) graduate of Michigan State University. He graduated with a Bachelor’s Degree in Fisheries and Wildlife with a concentration in water sciences.  Bill’s experiment was designed to examine whether wild lake sturgeon larvae captured during the period of dispersal from spawning areas had already begun feeding on natural food sources in the stream and thus would prefer natural foods during rearing as opposed to common hatchery diets; primarily brine shrimp. During the larval period wild lake sturgeon experience high rates of mortality after hatching from eggs due to unknown environmental or physiological causes.  Bill conducted an experiment examining the survival and growth rates of wild-caught larval Lake Sturgeon from the Black River using different food and aquaria density treatments in the rearing facility.  The project’s goal was to make recommendations for prescribing feeding and rearing conditions for wild-caught larval Lake Sturgeon to increase survival within the rearing facility and thus meet or even exceed Lake Sturgeon stocking expectations for surrounding water bodies in the future. 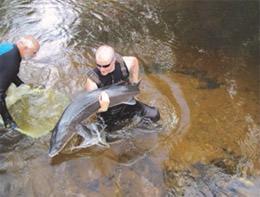 Ryan Young is a recent Michigan State University graduate in Fisheries & Wildlife. Ryan assisted with a research project investigating the effects of stream physical and biological components (notably macroinvertebrate communities) on sturgeon egg deposition and survival in spawning areas.  Lake sturgeon spawn in large groups and eggs are broadcast over large areas of stream.  During incubation, lake sturgeon eggs are exposed to harsh environmental conditions resulting in significant mortality.  During this experiment Ryan measured fine-scale environmental and biological characteristics of the stream including water depth, water velocity, substrate size, as well as the abundance and diversity of aquatic insects that may prey on eggs.  The project’s goal was to measure ecological predictors of egg location, abundance, and survival. 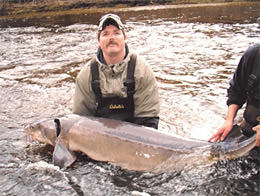 Ryan Hastings is a native of Cary, Illinois and is a graduate of Eastern Illinois University.  Ryan graduated with a Bachelor's degree in Biology.  This was Ryan’s second year working on the Black Lake sturgeon project.  During this experiment Ryan measured distances larval lake sturgeon traveled after hatch in an artificial stream established at a stream-side research facility operated by Michigan State University and the Michigan Department of Natural Resources.  The goal was to determine whether larvae exhibit preferences for substrate type (small gravel, large gravel, sand).  Immediately following hatch, free-swimming larval lake sturgeon burrow into suitable substrate for protection from predators and for space as they utilize yolk energy reserves to develop to a condition where they are feeding and can maneuver in streams.  However, human-caused changes in stream substrates such as increased sedimentation has reduced the amount and distribution of suitable substrates.  We suspect that these changes have affected larval development and survival.  Preliminary results revealed that distances traveled in the artificial stream was dependent upon substrate type.  Information gathered from this experiment will allow managers to determine if current spawning sites chosen by spawning adults offers suitable habitat for hatched larvae or whether larvae would disperse to find suitable substrate, thereby increasing changes of mortality.