The 2014 Black Lake research season began in early May when Michigan State University (MSU) and Michigan Department of Natural Resources (MDNR) researchers spotted a five foot lake sturgeon ascending the Upper Black River upstream of the Sturgeon for Tomorrow Site B guarding area. After a prolonged winter combined with a rapidly warming spring, the adult run was rather compressed into a single long 3 week spawning event. Due to this delayed beginning of the spawning season and a rapid increase in temperatures at the end of the sampling season, 2014 proved to be one of the shorter adult surveys conducted on the upper Black River.

A total of 257 lake sturgeon were captured throughout the spawning season which ran from early May to early June. Gametes were collected from spawning lake sturgeon (34 crosses from 20 females) and were transported to the Streamside rearing facility for fertilization and rearing. Researchers noted no evidence of poaching this year for the second consecutive year. Expanded sturgeon guarding activities at additional locations over past years seem to have helped deter these incidences.

Researchers also captured wild larval lake sturgeon as they dispersed downstream. Previous research has found that these wild larvae represent the best stock source genetically, so these larvae are captured and brought back to the Streamside Rearing Facility in an effort to enhance survival of this unique stock source. This year, larval sampling began on May 26th and ran until June 28th. Throughout the spawning and larval drift period the river water levels regularly fluctuated, but provided ample opportunity to sample drifting larvae. Researchers captured over 15,000 dispersing larvae during evening larval drift surveys.

Ongoing research involved extensive habitat mapping in efforts to assess larval sturgeon habitat. Several passes with a side band sonar unit produced a georeferenced substrate and depth map of the river bottom. This mapping effort was validated through a series of transect sampling that assessed substrate size, water depth, water velocity, aquatic invertebrate community, and counts of larval sturgeon. This will allow researchers to assess preferred habitat for larval sturgeon, and develop a model that could be used to assess habitat in other river systems.

In addition to assessing larval sturgeon habitat, researchers additionally were looking into larval sturgeon predators. This entailed a large effort of sampling for potential predators by barge electrofishing stretches of the river, spanning from the spawning grounds to the larval drift site. Predation was assessed via gastric lavage, which flushes the stomach to look for larval sturgeon and their DNA.

We would like to thank all of you for your assistance on the river and your support during the off-season. 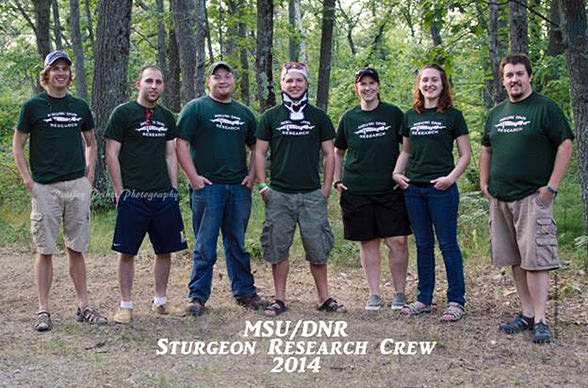 The streamside rearing facility/sturgeon hatchery is an important component of lake sturgeon rehabilitation efforts in the Cheboygan River watershed. These efforts involve the Black Lake Chapter of Sturgeon for Tomorrow, the Department of Natural Resources, Michigan State University and Tower-Kleber Limited Partnership. The facility conducts research to determine growth and survival of lake sturgeon, thanks to DNR, federal, Great Lakes Fishery Trust and Sturgeon for Tomorrow funds. Results provide much-needed guidance for managers involved in lake sturgeon recovery efforts, while improving the effectiveness of lake sturgeon culture and stocking efforts. "Many of these stocking efforts were public events that shined a spotlight on how important lake sturgeon are to our state, "said DNR Fisheries Division Chief, Jim Dexter. "Michigan has a long history with the lake sturgeon and working with our partners helps us to move forward toward protecting them for the future."