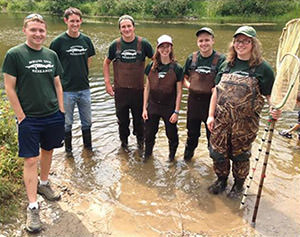 The 2015 Black Lake research season began April 30th when Michigan State University (MSU) and Michigan Department of Natural Resources (MDNR) researchers captured six Lake Sturgeon ascending the Upper Black River. This was a later start compared to previous years, yet the adult sampling period continued into June with the last sighting of a sturgeon in the river being recorded on June 8th.

In addition to raising eggs in the hatchery, wild larval Lake Sturgeon were captured as they drifted downstream. Previous studies conducted by MSU and MDNR researchers found that these wild larvae represent the best stock source genetically, so all captured larvae are brought back to the Streamside Facility in an effort to enhance survival. This year, larval drift sampling began on May 19th and ran until there were two consecutive unsuccessful capture nights, which this year was on July 5th. 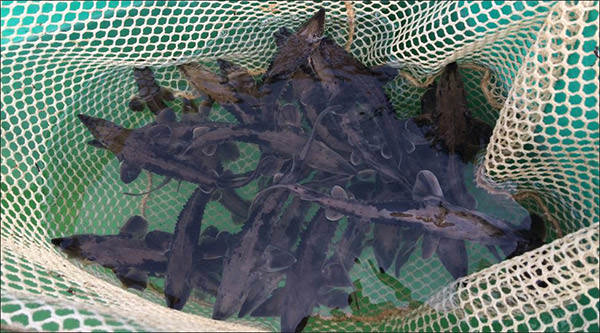 At the end of the hatchery season Lake Sturgeon reached an average length over 7 inches prior to release which is larger than previous year’s release size. Larger growth can be attributed to improved feeding strategies developed through research activities conducted at the Black River Streamside Facility.

Ongoing research involved identifying sources of early mortality in larvae, particularly those preyed upon by fish predators (such as Rock Bass). In addition to identifying sources of larval mortality in the wild, researchers continue to focus on identifying more efficient food types for hatchery-raised Lake Sturgeon as well as continue to investigate the downstream passage of juvenile Lake Sturgeon through hydroelectric facilities.

The goal of the survey is to gather data on the survival, growth rates and other information for these stocked fish.

The Burt Lake sturgeon assessment was conducted September 14 through October 5 and targeted both juvenile and adult sturgeon.  The fish were checked for tags which showed if the sturgeon were wild (no tags) or stocked. The tags provide a history of when the fish were stocked and when they might have been caught in previous surveys.  The wild fish were also tagged so that they can be followed in new surveys or when they are possibly harvested in the future.

Sampling locations were randomly chosen throughout the entire lake. Three boats were used, including two tribal boats, and one DNR boat and crew. There were 63 unique sturgeon captured and 3 of these sturgeon were recaptured during this survey.  In addition, 7 of the captured sturgeon were tagged during the 2011 survey. Despite the smaller mesh size, the 2015 survey did not produce many small sturgeon and provided little evidence of strong natural or stocked juvenile recruitment.

Very preliminary population projections estimate the sturgeon population of Burt Lake to be between 644 and 1535 sturgeon.

Expanded numbers should be interpreted with caution due to the low numbers captured during the survey.