We began the 2005 field season with many research objectives, each designed to build on data collected during previous field seasons. Some of these included: 1) capturing adult lake sturgeon to provide a long-term evaluation of annual spawning stock abundance, sex ratios, size and age class structure, and spawning frequencies, 2) determining the initial distribution of recently deposited lake sturgeon eggs, 3) monitoring changes in the distribution over time and estimating total egg loss, and 4) estimating the initial abundance of recently hatched larval lake sturgeon and the magnitude of loss during initial downstream drift. The paragraph below includes just a sample of some research highlights from this past field season. 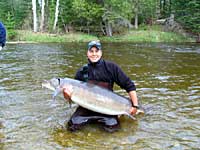 A total of 154 lake sturgeon were captured and tagged, 46 females and 108 males. This represents the largest number of fish captured since spawning surveys were initiated. Of the 46 females, 33 were untagged and 13 had been tagged during previous spawning runs. Of the 108 males captured, 45 were untagged and 63 had been tagged previously. Nearly half of all fish (49.4%) in the 2005 spawning run were recaptures. Up to this point, we have tagged a total of 423 unique individuals (257 males, 166 females). We were able to determine that a dramatic loss of eggs occurs over time based on systematic kicknet sampling below known spawning locations. Further analysis should reveal how the distribution of eggs changes over time and if egg retention is associated with certain stream habitat types such as larger rocks or certain river flows. It is also now clear that fungal infection is a major source of mortality at the egg stage. Larval drift samples were deployed and monitored at two locations on the Upper Black River (Upstream Site: below spawning Site C; Downstream Site: traditional larval site). Sampling was conducted during a 5 hour timeframe, beginning at dusk (9:00-10:00 pm) and ending in the early morning (2:00-3:00 am). Majority of the larval fish were captured during several "peak" hours of activity within a sampling evening (between 10:00 pm and 1:00 am). Overall, a total of 7,434 larval lake sturgeon were captured and transported to the Wolf Lake and Black Lake fish hatcheries for release later this summer and fall. Based on initial analysis, it appears that at least some loss of lake sturgeon occurs during drift and that mortality could be related to the body size of an individual. 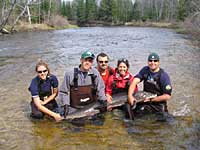 In conclusion, 2005 was an exceptional year for the Black Lake sturgeon population in terms of the level of recruitment observed, and for increasing our understanding of previously unknown aspects of this species' biology and reproductive ecology! Information obtained on each of the research objectives outlined above is critical to understanding the factors that are potential barriers to lake sturgeon reproductive success.

Once again, I would like to thank all members of Sturgeon For Tomorrow for providing continual support and encouragement for this research project. I would also like to thank the Michigan DNR for providing funding, equipment and assistance in the field.