Volunteer for the current Guarding Program. 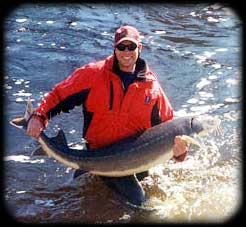 On April 21, the temporary weir and video equipment were again set up at the mouth of the Upper Black River. During the time of setting up the weir, there were 5 sturgeon playing around but not quite ready to make their journey upstream. In the 38 days to follow, water temperatures fluctuated often and were 47 to 58 degrees Fahrenheit. Likewise, the water levels varied and at times went up 18-24 inches. Water velocity also varied. These drastic changes in environmental conditions reflected highly on the behavior of the spawning giants.

A total of 524 sturgeon were video taped during this years spawning run. An estimated 419 (80%) of the total number of sturgeon seen on video is a preliminary conservative number of the 2002 spawning run. It is clear that some of the sturgeon returned to the lake when the water temperatures decreased, then returned to the river when the water temperatures raised.

Two Sturgeon Tours were scheduled for May 5th in cooperation with the 2nd Annual Celebrate Spring Mushroom Hunt on May 4th, sponsored by the Cheboygan Tourist Bureau. Forty sturgeon enthusiasts participated in the tours which booked solid in a matter of days.

The "A" Team, Kregg Smith, Matt Kerr and Melissa V. conducted the field work this field season. A total of 108 sturgeon were tagged in the river, each were injected with a PIT and floy tag, and biological data was collected. There were 17 male recaptures from the 2001 spawning run… interesting! 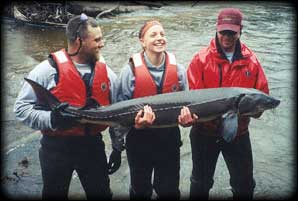